The homology of clinical-academic nursing

A blog by Anne-Marie Russell

Florence Nightingale (1820-1910) was a forerunner of nursing practice and an exponent of evidence-based nursing. She came from a privileged background but as a woman in the Victorian era and as a nurse encountered certain challenges. Later in her career, she proposed a potential appointment as a chair at Oxford University to teach applied statistics and was prepared to contribute £200. It will remain unclear as to why this did not progress – whether it was because her proposal was misunderstood or whether her profession as a nurse or being a woman was indeed an obstacle1. A century and a half on, this blog considers how the nursing profession has evolved and the challenges it faces in the 21st century.

Nightingale’s leadership style was knowledge-based and evolved to a point in time where she developed and led a team of doctors, a major statistician, two engineers (one army and one civil), and learned research skills including the application of statistical methods. This suggests that neither gender nor profession were a barrier to leadership. Today there are a number of Professors in nursing who lead multidisciplinary clinical research teams, but the growth of this model has been relatively slow.

Leadership is a core element of nursing practice – many nurses positively influence nursing practice and patient care with humility at the ground level through understated and sadly often unrecognised leadership. To lead and influence at a senior level nurses have had to make a choice. Over the last few decades, career progression in nursing in the clinical setting has been into service management roles; increasingly removed from direct patient care. Educational leadership has involved moving into the higher education setting.

Pure nursing academic leadership has evolved more slowly, due in part to a lack of clearly defined academic career pathways in nursing. In the UK this may also be influenced by disproportionate nurse representation at the universities within the ‘golden triangle’, which attract the highest research incomes of all British universities, but focus on scientific disciplines outside of nursing.

Nightingale was an innovator and academic leader in nursing. She has been described as a systemic thinker and a “passionate statistician”. A pioneer in the visual presentation of information and statistical graphics, Nightingale was credited with developing a form of the pie chart now known as the polar area diagram. Knowledge of statistics and applied statistics could have a prominent place in the contemporary nurse training curricula. A lack of understanding of statistics can be a barrier to effectively critiquing research and to developing one’s own. Many nurses, like Nightingale, are self-taught in the use of statistics.

Over the last 15 years Advanced Practitioners and Nurse Consultants have pushed through traditional medical / nursing boundaries and have been pioneers of independent practice. In the community some traditional general practices have been replaced by nurse led services employing salaried GPs, and in the hospital setting there are many nurse led clinics providing specialist care. These hybrid roles integrate clinical, educational and research practice underpinned by leadership skills.

Combining clinical-academic roles requires intellectual stimulation to encourage questioning, and to challenge the status quo in order to continue to evolve. This may be achieved through engagement with professional organisations and / or formal academic study.

Funding streams specifically to support nurses in their academic career development are available for example through the National institute of Health Research2. ERS Fellowships offer short-term funding and are under-utilised by nursing members of the ERS. To access these successfully there is a need for training and support in how-to write a good funding application, and more nursing academics to support and supervise primary research. Training in research and financial management should not be overlooked. Collaborating across disciplines and Europe can strengthen a funding application.

Our recent paper in the ERS publication, Breathe, considered the contemporary challenges for specialist nurses working in interstitial lung disease (ILD)3. The development of ILD specific clinical and academic standards to sustain and expand a dedicated ILD workforce was called for. Many ILDs are associated with high morbidity and mortality, such as idiopathic pulmonary fibrosis (IPF), which has a marginally better prognosis than lung cancer4. There is an emotional burden attached to supporting patients and families with life limiting conditions such as these. It is often the nurse who is both the first and continuing point of contact. For example, a clinical nursing colleague running her own clinics reviews 20 ‘dying’ patients every week. This potentially exposes nurses to high levels of emotional stress, as the therapeutic alliance is unlikely to be wholly objective.

Nightingale must have experienced distressing situations in the Crimean war. Whilst being forward thinking in applying a health-related outcome measure for her patients, the fact that it had only three-points: relieved; unrelieved; and dead5, reflects the gravity of that time.

Furthermore, the data she collected and analysed reported an annual mortality rate of 60% for soldiers in civilian and military hospitals1. This informed changes in practice, and led to improvements in health care practice and a decline in preventable deaths.

In the ILD specialism we are working with life limiting conditions for which there may not be a cure. Caring is a fundamental aspect of nursing but it can be all consuming and detract from objective critical thought, and can impact the time and intellectual capacity for professional development. Emulating Nightingale’s pragmatic approach, we need to question specifically what is important to the nurse-patient consultation, and are we making a quantifiable difference? This will inform relevant research questions and audit, enabling us to continually re-evaluate and improve patient care.

Thankfully our contemporary approach to measuring patient reported outcomes is more sophisticated, but it is important to discuss the outcomes recorded by the patient with the patient, to plan for future care and open up discussion on palliation and transitions to end of life care where appropriate.

There are a number of ILD nurses who work at advanced practice or nurse consultant level, with the majority fulfilling roles as specialist nurses. We do have some ILD specific clinical standards and pathways of care for patients; the Royal College of Nursing in the UK offers a credentialing programme for advanced practice that provides one approach to define parameters of practice6.But standards to develop and support clinical-academic career pathways are lacking.

For senior nurses working in ILD there is a responsibility to provide a role model for the behaviours they wish to instil in others, and to inspire and motivate others to achieve their potential within the specialism. To support professional growth, the ILD Inter-disciplinary Network has launched a no-cost UK and European mentorship programme for nurses working in ILD. Mentorship provides the opportunity to explore the challenges of balancing a clinical-academic career. Most importantly, it offers time out to think; an art that is often compromised in our technology filled lives.

Nightingale decided how best to use her time and energy according to the best available evidence. There is merit in this approach, not least because it requires thought. The clinical-academic pathway taken by Nightingale was not without its challenges. Whilst challenges remain in contemporary nursing practice we have moved on, but we must make more of the opportunities on offer and continue to create our own to cement progress.

Her field of expertise is in interstitial lung disease, patient-centred research and outcomes. Her doctoral research led to the development of a patient-reported outcome measure for patients with idiopathic pulmonary fibrosis (IPF-PRoM) which is undergoing international validation.

Anne-Marie is secretary to the European Respiratory Society Nursing Group (Assembly 9) and is a committee member of the European Idiopathic Pulmonary Fibrosis and Related Disorders Federation. She is the chair of the ILD Interdisciplinary Network/UK and is leading on the recently launched European mentorship programme.

Anne-Marie is an assessor for the Royal College of Nursing Accreditation of Advanced Level Practice. She has served on the program committee of the nursing Assembly since 2015 and was appointed chair elect in 2018. She continues to serves on the ATS Awards Committee. She is the author/co-author of numerous peer-reviewed publications on ILD.

References for this article 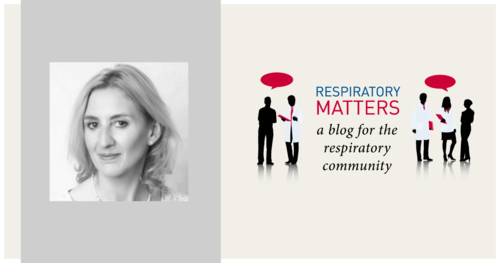